is not a rare last name, if you're Jewish and live in . Yet, among the hundreds of flights I have taken to and from , I had never sat next to another , unless a member of my immediate family. That is, until this past Thursday. I got on my Lufthansa flight (Tel Aviv-Munich) and looked back to my seat, . Next to my seat, an ultraorthodox Jew reading a religious text with the same Dr. Rosenberg on his boarding pass. The steward was quite confused. It didn't look like an auspicious start to my flight. Hello, hello, and that's it, I think to myself, and best to ignore him the rest of my trip.

How wrong first impressions can be. The man turned out to be Rabbi Dr. Jur. Berysz (Dov) from . He is not only an ordained rabbi who writes books on halacha (interpretation of Jewish law) but also a doctor of law who handles international legal disputes on insurance issues. I'm not finished. This prodigious fellow has twelve children and more than thirty grand children, kein ein ahora. Also, an owner of a small sticker printing company (etty-ketty). One of the most impressive, colorful and interesting passengers I have ever shared rows and seats with. 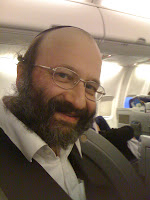 I ask the scholar to answer a question that has been plaguing me for many years. Is an observant Jew allowed to smell the odor of bacon? What should he do if his neighbor is barbecuing what Israelis facetiously call 'white meat' (pork to everyone else)? Close the windows? Sell the house? What if the neighbors are Jewish?

The rabbi surprises me. It turns out that there is no law prohibiting a religious Jew from smelling even the traifest of the traif (unkosher, I am thinking here a double cheeseburger granished with shrimp). I ask him whether the enticing odor might lead a religious man into transgression (there are laws, for example, prohibiting the handling of money on Shabbat for similar reasons). "What", he answers, "do you really think a religious Jew is going to eat hazer (pig) just because he smells it?"

Our conversation then takes an interesting turn. There are many blessing that Jews are supposed to invoke during the day. There are blessings for waking up in the morning, for eating various kinds of food. Even smell blessings, as for example when you smell the spice box on Saturday evening, as the Shabbat (Sabbath) ends. Turns out that is also a smell blessing for the 'etrog' (a citrus used during Tabernacles). What about smelling other foods? After all, it is well known that the smell of freshly baked bread spreads happiness and an urgent desire to buy practically anything (after all, that is why supermarkets have bakeries). However, among the sages, there is a disagreement as to whether the smell of bread itself warrants a blessing in its own rite. Because of this dispute, very religious Jews are supposed to refrain from smelling baking bread, lest they risk the dilemma of wondering whether to bless what should not be blessed, or not to bless what should.


So, folks, in case you were wondering: A very observant Jew, encountering his neighbor's barbecue, is not required to take any affirmative action whatsoever, even if the neighbors are Jewish and barbecuing pork chops and they smell really good (the chops, that is). On the other hand, if the same neighbor bakes a loaf of bread, the observant neighbor must close the windows and go for a long walk. As they say, go nose.
Posted by Dr. Mel Rosenberg at 4:01 PM

Links to my websites

My Bio - Forever changing as I follow my dreams

Dr. Mel Rosenberg
Share my passion for turning dreams into reality. World's no. 1 expert in breath odors, I also write funny kids' books, play romantic jazz and teach creativity! Recently, I have taken on a new job as Dean of Students at Afeka Tel Aviv Academic Engineering College. I couldn't be happier.

Which of my children's stories on www.meltells.com did you like best?

Blogging Away to Keep You Entertained