How Bird Brain was Hatched 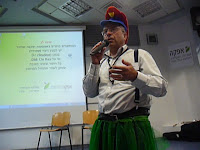 Any visit of Jeff Pulver to is in itself a reason to celebrate. And we do. Here at , my new ‘home’, we have a special relationship with Jeff, as he is the first international member of the Board of Governors of the College. 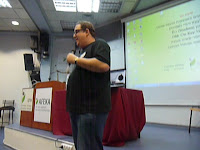 Earlier this year, we hosted Jeff’s 140 Conference here, and when we found out that he would be here for Purim, we ( and I) rushed to organize one of Jeff’s networking breakfasts.But we figured that it would be a shame to have hundreds of interesting and creative people here just for an hour or two of schmoozing. Why not add some kind of program/symposium following the fun?

Since we are at an engineering college, my first idea was to have a symposium focusing on the future of mobiles, or something equally geeky. But Jeff sent me a Facebook message suggesting that I look for a subject that I am passionate about.

Needless to say, I am passionate about creativity: teaching creative thinking (my first job at Afeka College, together with , was teaching a course called the ‘Art and Science of CreativeTthinking’), and sharing the culture and spirit of creativity. In this context I profess to be a follower and disciple of , who has been spreading this bug in and abroad over the past years (more on that later).

So the first idea was a symposium on creative thinking: can it be taught or naught? Here at the college, we have a rare ensemble of full-time and part-time staff (and even students) who use creative thinking methodologies (TRIZ, SIT, brainstorming, etc.) in their courses. But this might quickly turn into a wrestling match between people proposing the various techniques. Also, it would be unidirectional and informative, a bunch of talking heads, rather than experiential.

Enter the un-conference. The un-conference is a meeting in which there is a high level of democracy. In other words, the people attending can suggest themselves as speakers, as well as the topics they choose. The schedule is dynamic and sometimes spontaneous. Wondrous things can happen in the class and outside as well.

So I contacted Yossi and asked for his moral support. He agreed, and suggested that we work together with one of his up-and-coming youngsters, Noam Fine. Noam and I met up briefly at the DLD in , and then at the Arcaffe at (one of my favorite haunts, I used to perform there a decade ago when it was called “Rinchi’s”). Following some uffish thought, we settled on an un-conference on creative spirit and named it “Bird Brain”. Noam added the 10 to make it look respectable. He also designed the logo, set up a wiki. We enlisted the formidable organizational skills of (head of marketing at the college) and thus the un-conference was born.

So what went on at Bird Brain 10? In the auditorium, we had an eclectic mix of birds sharing their thoughts, visions, and art. Yossi talked about silliness as next to creativeness, and brought Noa Vax to the stage for an impromptu microphone tapping percussion solo. The next batter up was Yossi’s formidable brother Didi who talked about amazing useless things (two of which are on permanent display at the college). The Vardi brothers were followed by thespians, orators, musicians, magicians, conductors, inventors, patentors, and more. Presiding over the meeting on Mor’s perch was Max the talking parrot, who had very little to say, and was very popular as a result.

Outside, Hagai Cohen eggzibited his printer-organ, Moti Sokolov, president of the college rode on Didi Vardi’s walkcycle, Yossi Matias googled on the piano, while Ilil gave out delicious jam samples (jam session with jam), Aviva and Jehudi gave out smiling roses. There were lots of smiles.

For more on Bird Brain you can check out:

Links to my websites

My Bio - Forever changing as I follow my dreams

Dr. Mel Rosenberg
Share my passion for turning dreams into reality. World's no. 1 expert in breath odors, I also write funny kids' books, play romantic jazz and teach creativity! Recently, I have taken on a new job as Dean of Students at Afeka Tel Aviv Academic Engineering College. I couldn't be happier.

Which of my children's stories on www.meltells.com did you like best?

Blogging Away to Keep You Entertained